Difficult building in midst of crisis

What specific challenges have refugees faced during the pandemic and has the society been able to address these challenges? What health care needs do refugees have and how should the health care systems, and other support systems, be (re)structured to best meet these needs? How have refugees been affected by the stricter immigration legislations and how has it influenced different actors’ ability to provide adequate care and support? What self-care practices could be utilised and be recommended for refuges that live under uncertain living conditions? These were questions addressed in the World Academic Forum 2022 webinar "Healthcare and support for refugees – different perspectives on providing help" on 19 May organised by the Swedish Red Cross University.

The panel discussion was recorded and can be viewed in its entirety via the link below. 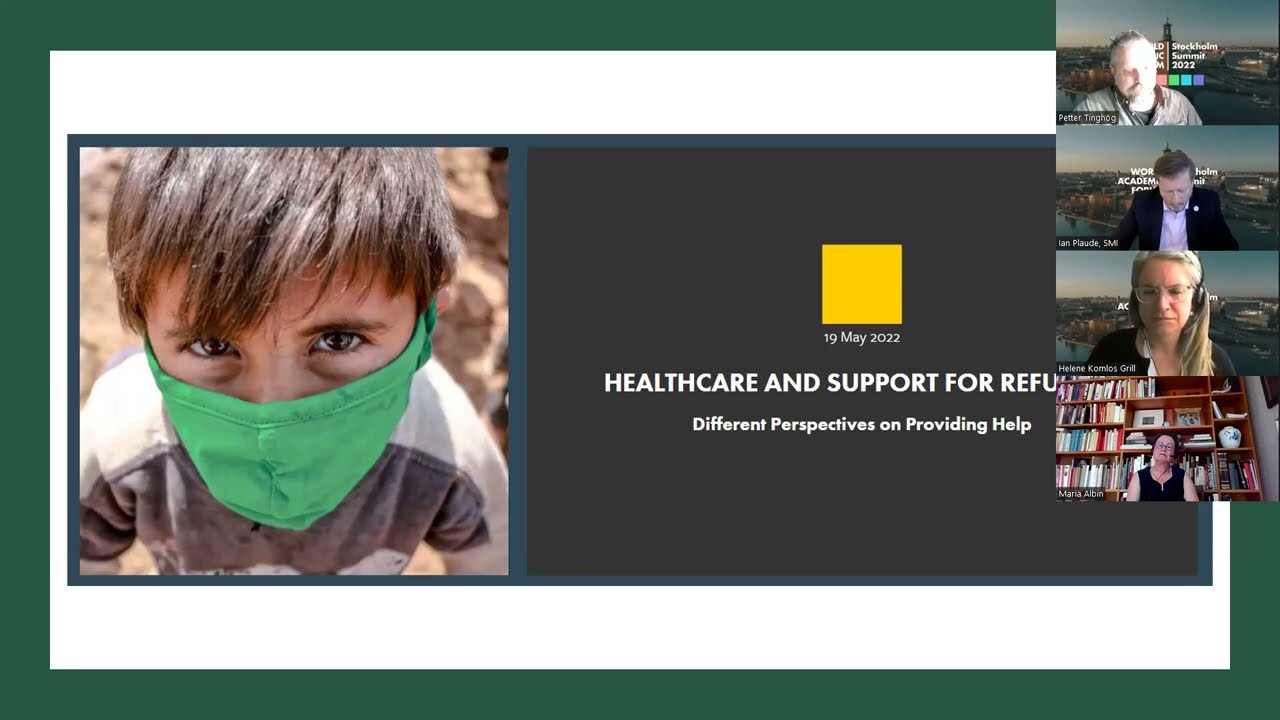 Healthcare and support for refugees – different perspectives on providing help

The panel included the following experts:

– Due to the divide in society we failed to protect those who live in dense underprivileged areas often in crowded flats, Maria Albin said, Maria Albin said explaining that from the research data drawn from the pandemic that we can see that more people passed away from the disease in densely populated low-income areas in Sweden where the most vulnerable groups live.

– The pandemic has increased the social inequity in Sweden. People in these areas felt stigmatised and excluded, information was also lacking in their languages which also exacerbated the situation. In general, statistics show that the most vulnerable people in society often suffer the most in crises, Maria Albin continued.

We need to be prepared for the next crisis

– Refugees have a need to meet care givers physically. The Swedish system is based on the personal number which makes this very hard. The system is not set up for refugees and during the pandemic the health care system went to digital treatment, a major issue for our patients, Lau Dahlgren, who works at the Swedish Red Cross Referral Centre providing care for undocumented migrants, said.

– You cannot build the system in the middle of the crisis. We need to be prepared for the next crisis he pointed out emphasising the importance of collaboration between different parties in society, the state, the regions, the municipalities, and civil society who has provided important support during the pandemic.

Memories were triggered by the pandemic

– Patients I have met felt that the memories from their flight were triggered by the pandemic crisis – by being isolated, lockdowns, loneliness, starvation, Frida Johansson Metso said.

– Many refugees were placed in between countries during the pandemic, their flight way pronlongued and often more difficult. Often refugees have a lack of trust in authorities of which the health care system is part of and building trust in a system takes time, which made them a risk group for not seeking health care during the pandemic. The long wait it takes for asylum seekers to know if they can stay in the country or not causes additional pain and distress and increases the risk for developing mental illness as post-traumatic stress, as it is a cumulative stress disorder, she said.

Basic needs are the same for all

– Refugees have the same needs for care that everyone else has. They need access to care. Access means geographically (i.e., services are easily located), financially (i.e., social protections) and culturally/linguistically (i.e., services are available through interpretation and other competencies). How do we ensure that access to care is offered in a way so that everyone gets access, Aku Kwamie asked pointing out that while these basic needs are the same for all, refugee health needs are further influenced by their pre-existing conditions as a result of conflict, conditions of their displacement before arriving in the host country, and host country policies towards refugees.

Culture is the fourth leg of health care

– Culture is the fourth leg of health care. When you are dealing with people in conflict who often are under distress, cultural expression in different forms can be a relief. An expression of identity and empowerment that helps you become an individual, Ian Plaude said stressing the importance of keeping to daily routines, being able to call a place home, feel part of the society and participate in activities not to be isolated.

The event was organised by the Swedish Red Cross University as an official part of World Academic Forum Stockholm Summit 2022. Stockholm’s united academia came together for four days to manifest the importance of academia’s role in society.

World Academic Forum is an interdisciplinary platform, connecting academics from all over the world, to explore the challenges of our time.